According to Wiki answers, the first word ever uttered was 'Aa,' which meant 'Hey!' This was said by an australopithecine in Ethiopia more than a million years ago. Next thing there were two, three, four words, and now here you are, reading this.

It is said that there are over a million words in the English language and about 1000 new ones are added a year from the 5000 estimated annual candidates.

Some of the newer words you'll know are blog, crowdfunding, twerk and Brexit. Ok, you may have to look up twerk like I did. Although you might also know that Shakespeare invented the word 'lonely', that Geoffrey Chaucer invented the word 'universe', that the word 'planet' was first used in the 14th century, and that Tony and Maureen Wheeler from Australia invented the phrase 'Lonely Planet' in 1973, for the most part, the people who first invent, use or publicize words or phrases are mostly unknown.

The first word that was astrologically engineered using a specific birth date is the word 'astrotist'. It was invented on June 19, 2022 by astrologer Adrian Fourie, posted officially on the Noel Tyl website. It has a Gemini Sun and a sensitive Pisces Moon, meaning it relates to speech and cries easily when you hurt its feelings.

Astrotist is both an adjective and a noun and refers to a person or people who are prejudiced or antagonistic towards others on the basis of their zodiacal signs, typically one that is said to be picky, like Virgo, power hungry, like Capricorn, mirror-kissing, like Leo, or a bastard, like Scorpio.

A general rule regarding its application is that signs 6 away from yours oppose or block you, signs 3 away fight with you, and the signs on either side of yours irritate the hell out of you. 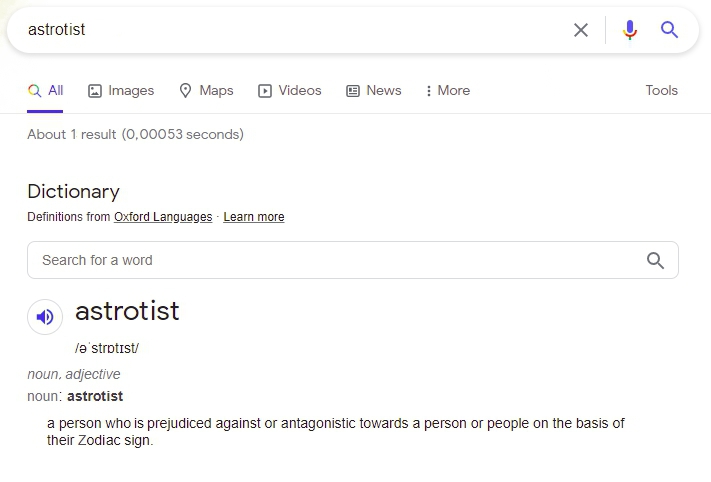