The Most Advanced Tips for Texas Hold'em Poker!

After playing poker for just a short period of time you must have noticed how sometimes everything seems to go your way. You seem to be "in sync" and the variances in your play and how they match the shape of the game work out profitably for you. You do well on several tables at once, slow-playing and making big bets and bluffs at the right times. 50-50 calls go your way. AK works for you!

Believe it or not, these are days when you are generally well-aspected by the planets.

2. It will Reduce Your Bad Beats

Bad beats accompany bad transits. Bad beats are just another way of saying "bad luck". In poker, there is nothing worse than having a perfectly calculated and executed hand beaten on the river by a unlikely card.

Bad luck is not a random thing. It generally occurs when you are unfavorably aspected by the planets. This is common knowledge shared by millions of people around the world who watch the effects in operation.

3. Things just tend to go well for you

As everybody knows, poker is largely a game of skill. Your knowledge of the game and level of patience and aggression positions you somewhere on the scale of all the players in the world. Within a few months of study and disciplined application you are already playing at a global skill level where you effectively have several million players below you. When properly applied, this enables you to slowly build up your bankroll and also allows you to enter bigger tournaments for free.

With the help of these planetary transits on your Lucky Days, you will generally be playing on days when you get dealt better cards and close calls tend to go your way. This is a fact. Planetary transits work and we can use their energy, even though nobody knows why.

This may be difficult to believe for non-astrologers, but I've only been playing poker for six months now (as at July 2009) and am already totally convinced that fortunate transits help tremendously when playing both cash games and tournaments. I got my first (Royal Flush) after playing for only four months on a well-aspected day, . Yesterday, with Venus sextile my natal Uranus, I got much deeper into a 1500 - entrant tournament than I normally do. Within 20 minutes of beginning play, I flopped a straight flush (1 in 4000 chance) and a few minutes later was dealt four 6's against an opponent's full house. I could just feel the luck kicking in, again and again, and it wasn't just my perception. Players from several tables commented on it.

Update: October 3, 2009. With Venus sextile my natal Sun this morning I got my second Royal Flush against a full house. Couldn't do a thing wrong and made money all morning. Using good transits to play I've had this once-in-a-lifetime hand twice in my first ten months of play, and believe me, it's not coincidence. Good transits bring good luck.

Luck is a very real factor in poker, ESPECIALLY in the early and late stages of a tournament. When you need a bit of extra luck, good transits will generally give you a 'better deal'. 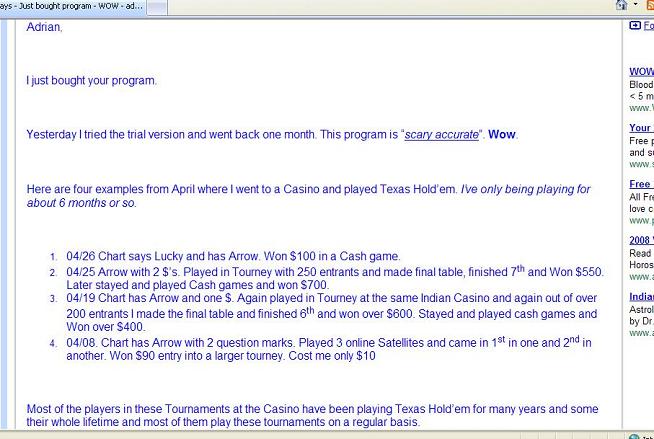 Update Oct 20, 2012
I've been playing for 3 years now and have also been working with a world-class player for the past six months. We've been following his transits closely and how they seem to affect play results and here is my evaluation. Playing by the Moon aspects is no good. You can win on bad ones and lose on good ones. Playing by transits is reasonably good strategy. I have noted that unchallenged transits generally bring you better hole and follow-up cards. This may sound like a subjective observation but I've sat through enough days where everthing seems to go your way and other days where it feels like you are getting the worst out of most deals to believe this. However, we have found that this gives you only about a 70% bias and can let you down fairly often. My friend had one of his bigger losses with Jupiter exactly conjunct his Sun!

The best advice I can still give you is to focus mainly on your lucky days like the player who emailed me above was doing.

We are continuing to investigate further on almost a daily basis. One observation I have made is that world series winners have all had their big wins under big life aspects, the "progressed" aspects to the natal chart as well as the actual geometry of the progressed chart itself. This latter technique is proving itself to be an amazing tool to help predict major periods of one's life.

More about astrology and poker later! I must still fully investigate whether the actual daily chart itself as it spins is good enough to use to make minute-by-minute decisions.

Update Nov, 2013
No! It doesn't work very well, even though theoretically is seems like is should. You can win on bad moon or daily chart aspects and lose just as easily. After 5 years of playing poker, all I can say is that you should play on your lucky days. It is very frustrating to try and play on well-aspected days alone. The success rate seems to be rather low, perhaps in the region of 60%. For some reason, maybe because of the high level of skill required, poker seems to operate differently from games of chance. I'm not sure whether knowing you are well aspected on a particular day somehow influences the way you play. From what I've noticed, the players I've followed, including myself, feel too confident on those days and tend to go "all in" more often, causing some devastating losses, quite often the entire bankroll. However, the WSOP player I have been working with did have his last good win ($38 000) within 30 hours of one of his only two lucky days showing for an entire 3-month period. He did not enter the WSOP tournament this year as he had recently become married. If you want to win big tournaments, look first for major progressions, and only then at build-ups of good transit activity within those periods. If the final table is on or near the date of a lucky day, all the better.