Simon Leviev is living life as a free man after only serving 5 months out of a 15 month jail sentence. In the wake of its release on Netflix, many have flocked to social media to see if they can get a glimpse of what his life is like now, knowing that he's been banned from dating apps for good after he conned a group of women out of millions of pounds.

It is estimated Hayut that has swindled about $10 million from people around the world.

Although he had several false aliases and fake passports, it seems his birth date is true. (www.luckydays.tv/shimonhayut.jpg)

Here's what Sepharial wrote a hundred years ago about his Saturn position:

"SAT: 18 of Capricorn: Authorities seem to agree that there is no good to be found here. Lying is the most pronounced sin. You may be cowardly, like gambling, quarrelsome, belligerent, and very much at odds with society and everyone around you. Naturally, this kind of behavior attracts very great problems of all kinds. This is hardly a good influence, and little as unfavorable stars concur, it may prove altogether evil. Its redeeming features may be its utter refinement (provided it does not become warped into ostentation or even worse) and that minor gift of the mind - promptness. The other features, good as they may appear, are all negative. The native will dare public opinion, but without deriving from this eighteenth degree of Capricorn a sufficiently good reason to do so; viz., that independence of thought and character which confers upon a man worthy of the name the right and the duty to rebel against society's idolized fallacies and organized wrongdoing. Here is no trace of courage, but an aggrieving and cowardly effrontery. There is no independence, rather a peevish tendency to be at cross purposes with one's interlocutors, sheepishly sponsoring the diametrically opposed point of view even if blatantly wrong. A blustering and chicken-hearted liar, erratic and stubborn, he will waste time and money on arbitrage, gambling and racing, shirking work with all possible means."

A ex-friend of mine has Mars at 17 and a half Capricorn (born Jan 16, 1962). He was known at school as a 'bullsh*tter' and went on to be one of the most pathological liars and womanizers I have ever heard of, let alone met. I'm not exaggerating when I give an estimate of about 300 women he's slept with. He's incessant. He often used to have 4 or 5 women he was sleeping with at the same time, and many of those were while he was married. He's just got divorced again and moved in with a woman nearly 30 years younger than himself. I unfriended him after many years of his creating absolutely fictitious lies about myself and many other people.

When I used to sometimes meet him for lunch with one of the new women, he'd contact me beforehand or meet me shortly before and say something like, 'Listen, the story is I am a vet and have my own farm', or, 'If she asks, tell her I'm a pilot' (this was before he even had the idea of buying a plane and getting his pilot's license). He is well known for concocting the most remarkable lies imaginable. An example, he has told dozens of people that I threw my motorbike off a bridge onto a busy highway, when I never did anything of the sort. We all refer to him now as 'the deceiver'.

In many cases, he seems to tell lies just because it makes him appear more interesting or his life sound more exciting. Admittedly, he has Mercury conjunct Jupiter (yes, he's a self made multi-millionaire), both square to the planet of deception, Neptune.

The interesting thing to me is that there is this area of the sky around 18 degrees of Capricorn that has this influence on people.

Naturally, I searched the list of known fixed stars to find the culprit. I've often done this and found what appears to be the cause of a particular condition.

The closest fixed star is Sheliak, which was at 18°21 Capricorn when he was born (https://horoscopes.astro-seek.com/astrology-fixed-star-sheliak).

Sheliak is a special kind of binary star system, known as an eclipsing binary. One star in the Sheliak system blocks out the light of its companion star in regular periods, as seen from our earthly vantage point. This blocking of one star by the other causes Sheliak's brightness to dim every 6.5 days.

This is a long shot but a binary star that has its rays alternately cutting off or switching like that possibly has the effect of creating un unstable or duplicitous effect.

Here is an image showing its position : 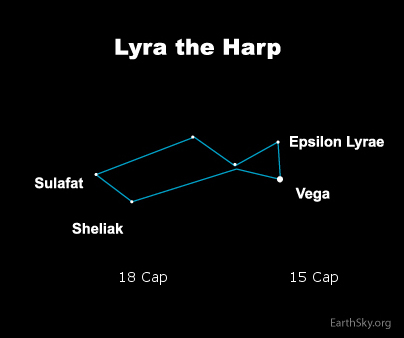 You'll see it is in the constellation of Lyra in Capricorn. According to Ptolemy, Lyra is like Venus and Mercury. It is said to give an harmonious, poetical and developed nature, fond of music and apt in science and art, but inclined to theft.

He lacks the music/art part but was investigated last year regarding tax evasion.

Another interesting point was raised in a book that an astrologer from Italy told me about:

The Degrees Theory: Secrets of Exact Astrology by Nikola Stojanovic.

Sadly, Nikola died from the corona virus 2 years ago, but in a section called 'The Degrees with Special Influence', he wrote a chapter entitled, 'The Secret of Evil at the 18th Degree of the Zodiac'. quote -

"The 18th degree is diabolical. During my years of research in the field of astrology, I have studied thousands of horoscopes of people and events. My research led me to become the first astrologer to discover the secret behind each degree of the zodiac circle. Each of the 12 zodiac signs has 30 degrees, and my research has shown that the 18th degree of each respective sign is the one with the most adverse influences."

He mentions people who had this degree prominent, such as Robert Oppenheimer (the man 'who made the atomic bomb'), Mikhail Kilashnikov (inventor of the machine gun) and Dr Joseph Mengele (known as Doctor Death) and Charles Manson.

I don't know quite what to make of this but there seems to be some truth here.